In 2013, Brave New Comedy formed as a sister company to Brave New Productions. An experiment in blurring the lines between comedy and theatre, BNC has focused on live comedy shows, podcasts and web series. This summer, our little start-up brought Richard Herring’s internationally acclaimed “Talking Cock” to Montreal for its Canadian premiere. A very adult, and very straight-forward comedy show focused on the history and mystery of the human penis, “Talking Cock” held 10 performances over 2 weeks to nearly entirely sold out shows and critical acclaim An undeniable success for BNC and a clear affirmation that there is a market for this new hybrid experiment. More information on BraveNewComedy.Com 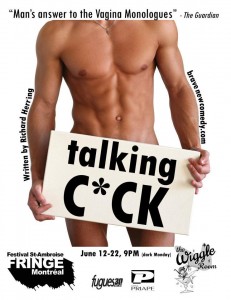 One of the Montreal Gazette’s TOP 12 picks of the 2014 Fringe Festival!

“Talking Cock is a male version of the Vagina Monologues. Four comedians, using examples from their own life and statistics from an online survey on their website (the stuff PhDs are made of) explain why the penis is fantastic and needs more love. The tension between the comedians and the audience was palpable. Talking Cock was a brilliantly funny performance by four guys who could work the crowd like nobody’s business (…) Talking Cock was a hilarious show with a relevant message that both the cock-ed and the uncock-ed will enjoy.”– Lyla McQueen Shah, MontrealRampage.com

” This summer, Montreal-based company Brave New Comedy is bringing Herring’s internationally acclaimed penis parade to the Montreal Fringe.  Brave New Comedy, a division of Brave New Productions, aims to push the boundaries between theatre and comedy.  They’ve spent a decade bringing new works to Montreal and, now with a dashing amount of experience under their belts (pardon the pun), they are working with said famed comedian to adapt his stand-up show into something that can be divided amongst four actors.  By doing so, co-directors Donald Rees and Tracy Allan and performers Jason Yearow, Santi Espinosa, Nir Guzinski and Sean Curley seem to be succeeding Herring’s theatrical goals further.

Originally, when Herring premiered his show in Edinburgh in 2002, the piece was heralded as a “man’s answer to the Vagina Monologues”.  The comparison doesn’t really ring true if the piece is a one man show.  The Vagina Monologues is Eva Ensler’s amalgamation of  a female voice through various voices ergo one man and his penis doesn’t compare.  By splitting Herring’s show into several performers, Brave New Comedy is actually constructing something similar with Herring’s work:  Several men discussing their genitals in order to appeal to a universal male voice.  The result?  A multi-dimensional show about penis. HOW?? It’s such a brilliant little adjustment to a comedic piece and it adds many layers of theatricality.  Brave New Comedy always works to blur the line between comedy and theater and by premiering Herring’s work in Canada with a theatrical twist, they are absolutely doing just that.
The show opened last Thursday to basically sold out houses. The humour is not for the faint of heart but is absolutely for those who would like to laugh immediately and probably for a while after the show.  The sincerity, however, will hit home with most audience members.  The universality of things that are personal, private, terrifying to experience and terrifying to talk about can be appreciated by any audience member.  Though there is plenty of genitalia in the show, there is also plenty of heart.  Bring  both of yours with you and you’ll be moved in all kinds of ways.” – Newborntheatre.weebly.com

Praise from our audience at Montrealfringe.ca

Go See This! This show not only has 4 very attractive males and tons of laughs but it also has genuine heart. Interesting, reflective and fucking hilarious. What’s not to like about that all while drinking?

Funny Cocks. Much more stand up comedy than I thought it would be but still very adult and hilarious. Nice bar and good vibes.

Awesome Talking Cock show! Everyone has to go see Talking Cock! It is hilarious, ridiculous, fun and touching( no pun intended lol) . The cast is amazing at telling the facts and explaining the obstacles that men have to go through . I can honestly say I learned alot. Their contrasting and interesting personalities make the show very watchable and engaging! A must see! And to all men, be kind to youraelf and to your little men!

Penis Praise For Talking Cock! I guess these guys had a rocky opening night cuz we heard mixed buzz going in. Clearly, they’ve hit their stride as the show last night was hilarious from start to finish. My girlfriend and I both loved it and would recommend it to anyone looking for a good laugh…though not for the prudish. Hysterical history to statistics, personal stories, offensive accents and a great scene about a penis museum in Iceland, it really covers the A to Z of the penis. More stand-up experiment than performance art but that’s the fun of the festival.

I found out more information I ever thought  needed to know from ”Talking Cock”. Phew…..and all I can say is,  in the words of Elaine Benes “I don’t know how you guys walk around with those things” Great show..congrats to Nir and the rest of the talking cocks! A fun show and we loved the venue!

Great show – would definitly go see a 2nd time with all my other girlfriends!   😀

I went to see this show last Saturday and really enjoyed it!!!  These 4 guys kept me engaged the whole time, had me laughing throughout and talk about cock for the rest of the night!!!  Aside from being highly entertaining, it’s very informative with surprising statistics (based on surveys filled by several men and women) and hilarious conclusions drawn from extensive research.  There are lessons to be learned as well, an important one being that men are not the sex-crazed monsters we sometimes make them out to be, but just as vulnerable and sensitive as women are!!!

Boys and girls alike will find lots of amusing things about The Penis in TALKING COCK. While it’s not a scientific show per say, it’s rather entertaining and informative. It’s info-tainment? Anyways, if four guys talking about cock is not enough, the insights by the answers submitted by men and women who filled out the survey are quite hilarous and eye-opening. Maybe you’ll even walk out learning something!