Montreal, Quebec – August 8, 2014 – Brave New Productions is proud to announce the launch of their official 2014/2015 season. In keeping with the company’s mandate to bring Montreal audiences exciting and original theatre, the season brings audiences three Montreal premieres and one original World premiere.

Season passes are available for sale on BraveNewProductions.com/Season starting August 15.

Mistakes Were Made
Directed by: Stephanie McKenna (Motherhouse, The Lonely Bar) , Emma McQueen (God is an Iron, Merton at the Movies) and Nir Guzinski (Johnny Quickstep, Redshift)
Written by: Craig Wright 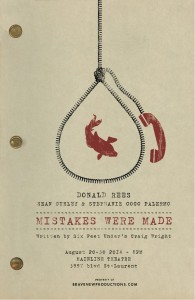 Synopsis: Felix is a NYC theatre producer about to blow a gasket. Jabbing at the hold button as he negotiates with a playwright, a movie star, a deep-pockets funder and an agent, all while mediating a Middle East crisis (involving sheep and militant rebels), this non-stop, fast-talking chameleon is bound for no good. With his overweight pet fish, Denise, as his only confidant and the weight of the world on his shoulders, the stage is set for a high-speed comedic train wreck of a tale. 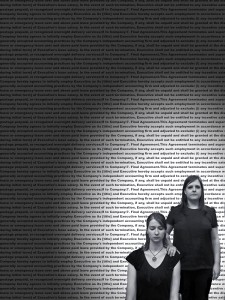 Emma (played by Neale) has been seeing Darren and she thinks she’s in love. Her boss (played by McQueen) thinks she’s in breach of contract. How far would they go to resolve the situation? Mike Bartlett’s play is a dark satire that’s ferociously funny while being absolutely appalling.

Directed by J.S. Elie and produced by Sherry Chen and Donald Rees, Contractions is a 55 minute comedic exploration into the perversions of a corporate society where goals are pitted against human instinct, and a fine line is drawn between the business of money and the business of life. 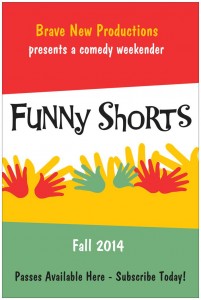 Synopsis: Monkeys writing Shakespeare, prostitutes who solicit using rhyme – Brave New Productions is excited to bring 8 funny shorts to Montreal for a night of unforgettable comedy. David Ives, Shel Silverstein and many more authors provide the text – while company members direct and unleash brand new talent to the stage – all for one spectacular weekend this fall. 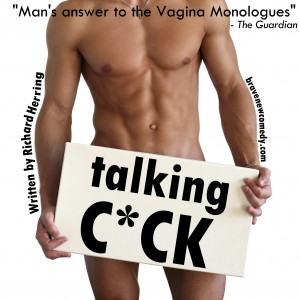 Synopsis: In 2013, Brave New Comedy formed as a sister company to Brave New Productions. An experiment in blurring the lines between comedy and theatre, BNC has focused on live comedy shows, podcasts and web series. This summer, our little start-up brought Richard Herring’s internationally acclaimed “Talking Cock” to Montreal for its Canadian premiere. A very adult, and very straight-forward comedy show focused on the history and mystery of the human penis, “Talking Cock” held 10 performances over 2 weeks to nearly entirely sold out shows and critical acclaim An undeniable success for BNC and a clear affirmation that there is a market for this new hybrid experiment. Talking Cock returns for one week this October as part of the Harvest Theatre festival at Mainline. 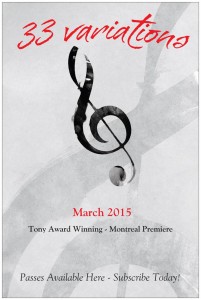 Synopsis: 33 Variations is Brave New Productions most exciting and challenging project to date. A mother coming to terms with her daughter. A composer coming to terms with his genius. And, even though they’re separated by 200 years, these two people share an obsession that might, even just for a moment, make time stand still. Drama, memory and music combine to transport you from present-day New York to nineteenth-century Austria in this extraordinary play about passion, parenthood and the moments of beauty that can transform a life. Brave New Productions is excited to premiere this incredible show for the first time in Montreal this March. 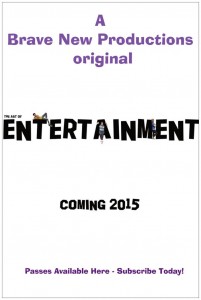 Synopsis: Brave New Productions closes its first season by returning to it’s roots with a completely original script written, directed and starring three company members who explore the value of entertainment in theatre, challenge the existing state of the industry – and reaffirm the meaning of real friendship. All while paying homage to over 50 plays and playwrights. The Art of Entertainment is Brave New Productions first original play in 5 years.