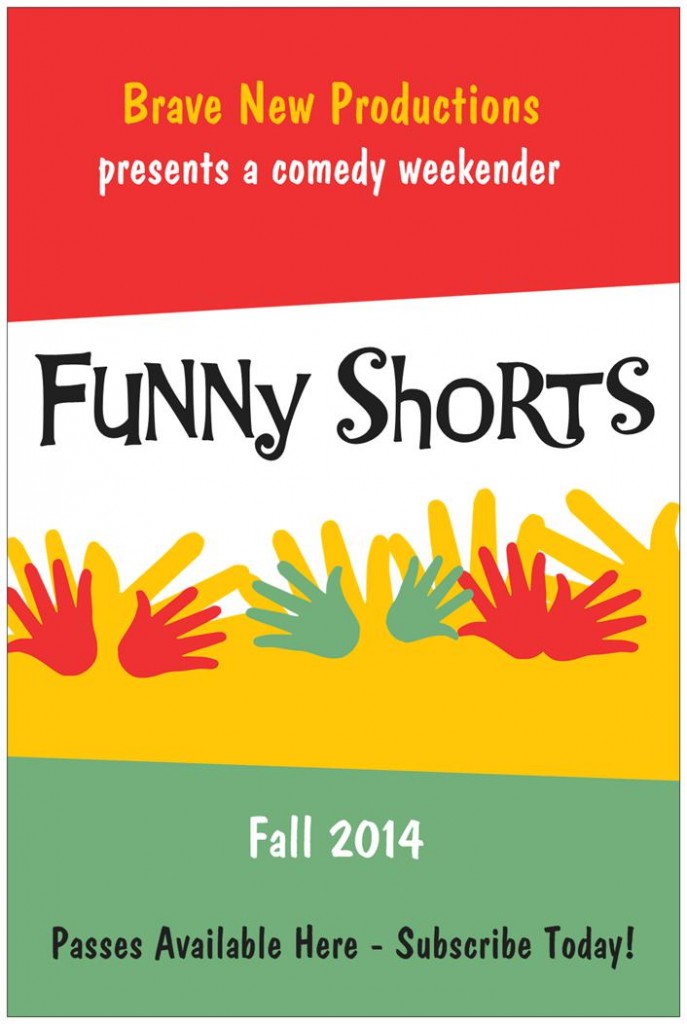 Brave New Productions celebrates the end of an incredible year with an evening of hilarious short plays starring fresh faces (as well as old, saggy faces) new to the Montreal theatre scene, working with our company members to create an unforgettable evening of laughter. From adult plays written by Shel Silverstein, to shorts by David Ives the master of comedy and even Woody Allen – it’s an unmissable weekend event!

In 2013, Brave New Productions introduced it’s weekend short play events as an opportunity to meet new talent, experiment with actor chemistry and provide the chance for company members to explore other roles in show creation. This year, after an incredible season resulting in 4 META nominations (Outstanding Independent Production: Mistakes Were Made, Contractions, Outstanding Emerging Artist: Elizabeth Neale (Contractions), Outstanding Lead Performance – Actor: Donald Rees (Mistakes Were Made), the theme of “Funny Shorts” aims to explore everything from physical comedy to theatre of the absurd in one tight, compact night of entertainment.

WORDS, WORDS, WORDS by David Ives, Directed by Emma McQueen recalls the philosophical adage that three monkeys typing into infinity will sooner or later produce HAMLET, and asks: What would monkeys talk about at their typewriters? Starring Gerard Harris, Amanda Golberg and Nathaniel Hanula-James.

ONE TENNIS SHOE by Shel Silverstein –  In the J.s. Elie directed “One Tennis Shoe”, Harvey (Lucas Chartier) needs to broach a delicate subject with his wife. He claims Sylvia (Chantal Bellavance) is becoming a bag lady, but she protests that her Bloomingdales’ shopping bag doesn’t make her a bag lady. No, says Harvey, but the picture frame, couch cushion and single tennis shoe retrieved from the garbage do. Not to mention the cold cooked oatmeal in her purse.

THE BEST DADDY by David Ives, Directed by Marc Roth. Lisa’s got the best daddy in the world. After all, he bought her a pony for her birthday. Too bad he shot it dead. Or did he? Angelo Vernucci and Julie Dalrymple star.

THE PHILADELPHIA by David Ives, Directed by JS Elie. A young man in a restaurant has fallen into “a Philadelphia,” a Twilight Zone-like state in which he cannot get anything he asks for. His only way out of the dilemma? To ask for the opposite of what he wants. Starring Sean Curley and Fernando Barbosa.

BUY ONE GET ONE FREE by Shel Silverstein. Merrilee and Sherilee (Stephanie Coco Palermo & Antonella Ruffollo) are offering the deal of the century. “Buy one, get one free,” these classy-ass hookers sing to a tempted Lee. It’s a golden opportunity. And it all rhymes. Directed by Donald Rees.

DEATH KNOCKS by Woody Allen. Nat Ackermann is on her bed reading when a mysterious figure climbs through her window and claims to be Death. Death is a little nervous; it’s her first day on the job. Starring Elise De Bussac and Amanda Goldberg. Directed by Marc Roth.

Our Saturday performance (Nov 29th) will be followed by ‘Brave New Comedy – LIVE’ -that is included in the price of admission for ‘Funny Shorts’! Montreal’s top comics take the stage.