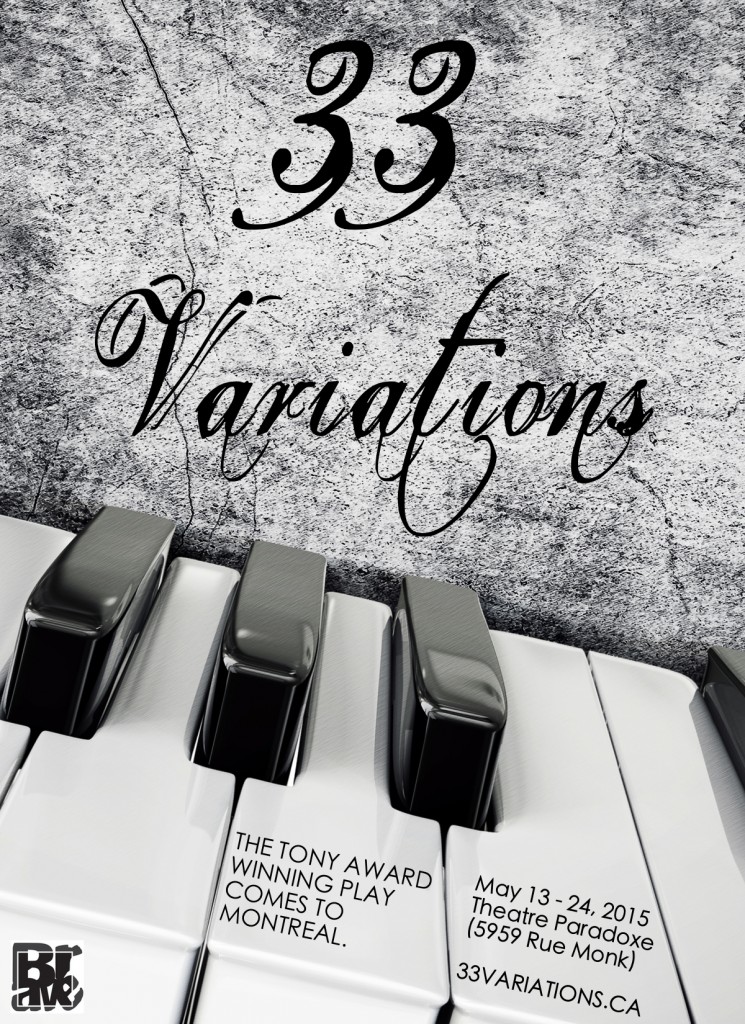 Montreal’s Brave New Productions celebrates it’s 20th show with “33 Variations” by Moises Kaufman. A grand piano sits center stage and through live music, drama, comedy and dance, the audience is transported from modern day New York to turn of the century Vienna. State of the art lighting and the truly unique new venue round out the unforgettable experience playing this May 13-24 at Theatre Paradoxe (5959 Monk Boulevard).

Brave New Productions is proud to announce the release of “Variation Us”, an original instrumental song created by Donald Rees and Ian Baird. Combining elements from classical and contemporary music, the song is available on iTunes with proceeds going towards fundraising of the show. Download the song now and enjoy it performed live at the show.

A mother coming to terms with her daughter. A composer coming to terms with his genius. And, even though they’re separated by 200 years, these two people share an obsession that might, even just for a moment, make time stand still. Drama, memory and music combine to transport you from present-day New York to nineteenth-century Austria in this extraordinary play about passion, parenthood and the moments of beauty that can transform a life.

“You don’t have to know Beethoven from Bach to find yourself thoroughly absorbed by the theatricality with which Kaufman has tied a historic event—the legendary mystery surrounding one of Beethoven’s compositions—to a drama about a fatally ill Beethoven scholar, her relationship with her daughter and the daughter’s burgeoning romance.” —CurtainUp.

“It’s a compellingly original and thoroughly watchable play for today that deserves to be remembered.” —Talkin’ Broadway.

Presented inside the completely redeveloped Notre Dame du Perpétuel Secours Cathedral at the brand new Theatre Paradoxe, “33 Variations” is being presented in Montreal with live music and a state of the art lighting design for nine performances this May. Tickets and More Information : http://www.theatreparadoxe.com