Praise from the media:

Though it uses Beethoven’s life and music as a source of fuel, this play isn’t really about loving the composer’s work or understanding the rhetoric of minuets and marches and chord changes. Instead, this Tony-nominated play by Moisés Kaufman develops memorable relationships: between lovers, between mothers and daughters, and especially between artists and their audiences.

“I have to understand why a genius became obsessed with mediocrity!” exclaims Katherine Brandt, played by Emma McQueen. Throughout the play, she becomes immersed in a search for answers about Beethoven’s long and arduous work with Diabelli’s waltz. Considered commonplace by McQueen’s present-day musicologist, the waltz occupied the great composer’s life for a handful of years, resulting in a set of pieces that revolutionized the form of the classical variation.

The play deftly weaves together the lives of Katherine and Beethoven on multiple levels. Katherine, diagnosed with ALS, battles her increasingly fragile physical condition with an unwavering determination to complete her musical research in Bonn, Germany. Simultaneously, scenes are staged from Beethoven’s life involving his desperation as he goes deaf to discover all of the melodic variations lurking beneath the surface of a simple waltz.

Katherine’s frayed relationship with her daughter, Clara (played by Joy Ross-Jones), complicates this knot of intellectual ambition. “I fear she will never really be anything,” says Katherine. Their strained interaction is pushed to its limit by the mother’s willingness to push others away in order to grow closer to her life’s work. Complicated, too, is the fact that Clara’s relationship with her new boyfriend, Mike (Nir Guzinski) is sparked by his role as her mother’s nurse, who must guide her through an incurable illness.

In the midst of sometimes-dissonant scenes occurring in different places and different centuries, Ian Baird, the pianist playing live and center-stage, subtly grounds the story. Self-awareness enters the performance in a lovely sequence where Beethoven confronts the musician while passionately rooted in the process of composing the very piece being played.

Stephanie McKenna’s performance as Beethoven is surprising for its ability to toggle between his strange and hilarious quirks and the oppressively heavy weight he carries as a mind lonely in its mad brilliance. The effect of a woman playing this role is one that deepens the relationship between the composer and Katherine. Both yearn to accomplish something that has never before been accomplished and to reveal to the world new freedoms and new knowledge. The scenes of their direct interaction resonate as a confluence of powerful wills that remain attached to incredibly vulnerable people.

To sink into the emotional lives of these people, to enjoy music in a new way, and especially to discover, as Beethoven did, more than you thought possible, go see 33 Variations at the Théâtre Paradoxe. 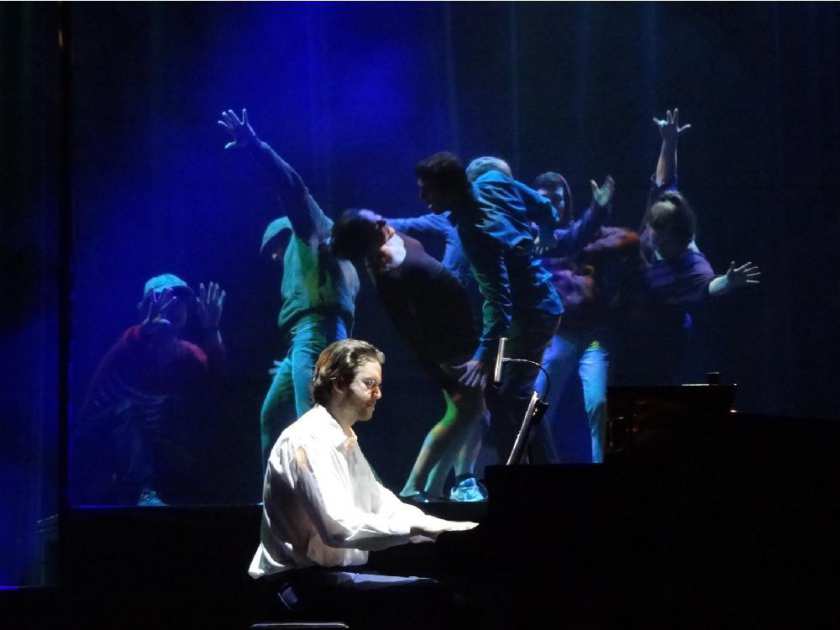 Never let it be said that Brave New Productions isn’t earning its name. This semi-professional company has shoved its way onto people’s radar through sheer hard graft and an eclectic output of regular plays, comedy events, readings and shorts.

The production of off-Broadway satire Mistakes Were Made earned the company four META nominations. Now it’s taking on its biggest project yet, a multi-Tony-nominated Broadway hit, with live classical music, that’s mostly famous for having brought Jane Fonda back to the stage after 46 years. Not only that, it’s presenting it in a new, untried venue, Théâtre Paradoxe, which is a beautiful converted church complete with stained-glass windows and all the imposing cavernousness of chez God.

Moisés Kaufman’s 33 Variations is one of those plays that takes on the role of sleuth to solve a mystery in the life of a great artist. In this case: why did Beethoven spend many of his last years tinkering obsessively with a trite little waltz dashed off by Diabelli, a music publisher on the make?

The action is split between the 19th century and the present day where, hot on the trail of the conundrum, musicologist Dr. Katherine Brandt travels to Bonn to collaborate with Marie-Noëlle Dufour’s no-nonsense archivist. Slowly, however, Katherine succumbs to a terminal wasting disease, an echo of Beethoven’s growing deafness and crippling ill health. Think Amadeus meets Whose Life Is It Anyway?

Kaufman is mostly famous for his magnificent piece of verbatim theatre, The Laramie Project, which reproduced real-life interviews around the murder of gay student Matthew Shepard (Brave New Productions tackled its sequel a couple of years back). 33 Variations draws on a similar technique in that it reflects Kaufman’s fascination with the “Diabelli Variations” after a record store clerk introduced him to them. It also semi-fictionally chronicles the research of real-life Beethoven expert William Kinderman.

As such, much of the play comes over as a docudrama about Beethoven’s last years, where modern-day speculation engages with dramatized historical passages (Stephanie McKenna as an irascible Ludwig Van, Bryan Libero as the pushy but naïve Diabelli, and – in a stand-out performance –  Sean Curley as Beethoven’s gentle but icily protective manservant). Appropriately, a grand piano takes centre stage where pianist Ian Baird illustrates, deconstructs, or just joyously plays, the Variations (…)

Co-directors Donald Rees and Tracy Allan achieve some beautiful passages throughout the almost three-hour playing time. A sensitive love-making scene, for instance, set to one of the more graceful variations. Or Dr. Brandt naked and vulnerable behind a radiantly-lit gauze screen(…) 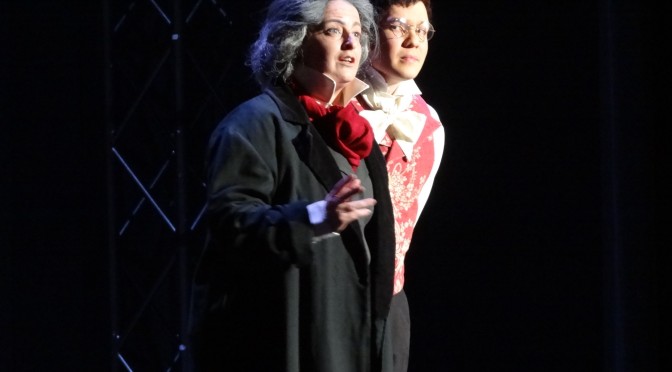 “Without music, Life would be a mistake”…Frederich  Nietszche

The TONY award winning show, “33 VARIATIONS” illustrates how
the creation of innovative music can become an all consuming passion that transcends centuries.

Now, both his music and times inspire this emotive production written by Moises Kaufman ( The Laramie Project: 10 years later) . It is powerfully mounted by Brave New Productions (BNP), which although a small semi-pro independent company, has created a  major contribution to the local Montreal scene.

From the early 19th century: John Abbot grad Stephanie McKenna , an ex Dance Animal grad, has morphed from a Gecko into an irascible but credible Beethoven.  Sean Curley  who last had a non speaking off stage role as an aquarium fish manipulator in BNP`s Mistakes Were Made  here is very much on stage as Beethoven`s man servant (and biographer?) Schindler. Concordia grad Bryan Libero  portrays Anton Diabelli, a Viennese music publisher and minor composer, whose open invitation to the leading composers of the day to write variations on his own little waltz generated  Beethoven`s 3 year obsession to create not one, not two, but 33 variations of it.

Fast Forward to the 21st century where: Emma McQueen, BNP`s artistic director, is superb as the academic musicologist Dr, Katherine Brandt who, despite a crippling disease, is determined to solve the mystery of Ludwig`s  obsession. Marie-Noelle Dufour adopts a German accent as Gertie Landenberger, archivist of Beethoven papers in Bonn,  Joy Ross-Jones is convincing as Clara Brandt, Katherine`s somewhat estranged daughter, who is distressed by her ailing mother`s departure to Germany. Nir Guzinski, a BNP regular, brings a light touch as Dr. Brandt`s  male nurse, Mike. Essential to all this is the inspired on stage piano playing of Ian Baird The atmosphere in the new performance space of Theatre Paradoxe, a former church, is perfect for the play. All in all, a wonderful combination of script, design, acting and direction that will probably be in line for a META recognition. 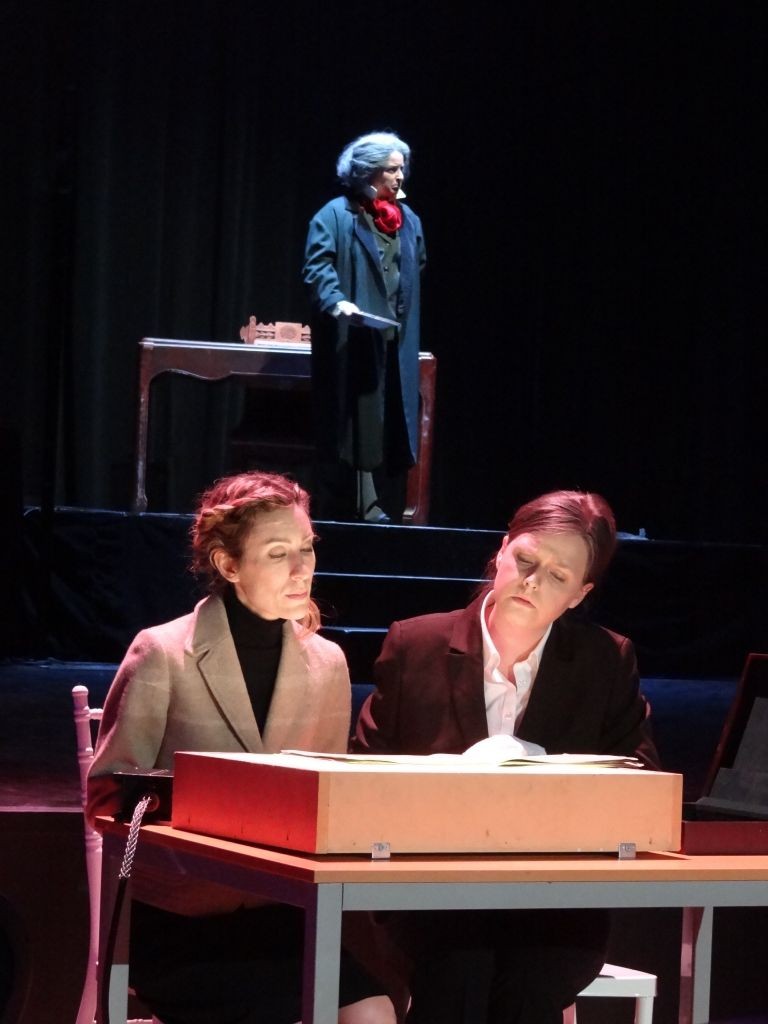 “What a great play! I loved it! Great performance.”

“A stunning performance on a beautiful stage. Amazing job to cast and crew. Congratulations.”

“Congrats on an amazing run and congrats to Brave New Productions for being one of the most ambitious, hard working and amazing companies out there!”

“A wonderful show, thank you all involved for a wonderful evening of just outstanding performances all around.”

“Last night was a beautiful opening! Congratulations to all involved.”

“I was lucky enough to catch this yesterday – A sublime combination of performance, text and music in a beautiful venue!”

“Really went in with no idea what to expect and was surprised at how engrossed I became in the story. I thought the acting was superb – not to mention the casting and the staging – and that guy on the piano…wow. Also what a great venue! I keep thinking about the show today and wanted you to know how impressed I am. You should be very proud! Bravo!”

“We had an excellent time last night at this play. Recommended, very thought-provoking, moving drama and well presented!”

“Honestly, it was fabulous. Some very poignant themes. It was so touching and really well put together. You should be incredible proud.”

“”The performances across the stage are all solid and as is the direction. The play is a solid hit destined to become a Broadway classic just like the master Beethoven himself.”

” Congratulations to all involved!! It literally made me both laugh and cry. Thanks for the special experience.”

“I was completely blown away by the show, the production, cast, venue. The story itself is phenomenal, but you guys brought it to life in a way that was so engaging and REAL, that it was like it was meant for me alone.”