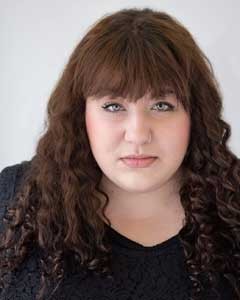 Amanda Goldberg swept into our hearts and onto our stage during our 2014 presentation of “Funny Shorts” including short plays by Woody Allen, Shel Silverstein and more. Each short directed by a different director, Amanda auditioned for multiple directors and ended up with multiple parts.

Her timing and delivery continue to impress us, even as she explores new roles including directing the recent “The Blood Harmonic” at Mainline.

Amanda Goldberg is a graduate from the Professional Theatre Program at Dawson College and works in the English theatre community as a Director, Actor, Dramaturge and Producer.

Since graduating in 2014, Goldberg has had the opportunity to act in numerous productions. Her selected works include: Susan B. Anthony in Arthur Kopit’s Chamber Music, Alison in Alexandria Haber’s Housekeeping and Homewrecking, Hippolyta in Shakespeare’s A Midsummer Night’s Dream, and a pair of delightful characters in Brave New Productions’ Funny Shorts.

She is a Co-Founder and the current Artistic Director of We Are One, a Montreal based feminist theatre company that aims to celebrate women both on and off stage. Goldberg has just completed her third production as a Director with We Are One‘s World Premiere of The Blood Harmonic, written by emerging Canadian playwright Calla Wright. Goldberg began working on this play in March of 2015 as a dramaturge. The play opened in April of 2016 and had a handful of incredible reviews.

In 2015, after spending months studying and directing at Royal Holloway, University of London, Goldberg has come back inspired to make a difference throughout Montreal’s independent theatre scene.

Currently, she is looking to work on socially-engaged theatre, autobiographical theatre and testimonial theatre, all stemming from the research that she did while living in England. Goldberg is in the process of completing her Undergraduate Degree at Concordia University in Theatre and Development.

She hopes to have more opportunities to work with artists in the Montreal independent theatre community, to continue acting in passionate and ridiculous roles, and furthermore to resume using theatre as a platform to open discussion on the important issues we are facing in our world.