Brave New Productions invites you to the premiere of Christopher Durang’s celebrated Chekovian spoof comedy with a special company member performance for one weekend only this holiday season. 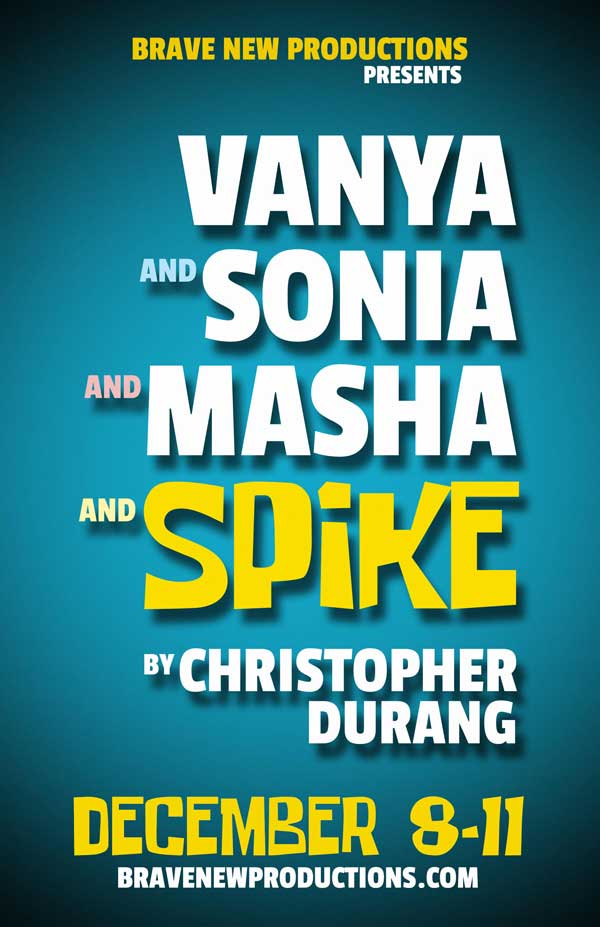 The company changes gears after a busy, experimental season involving interactive theatre, original script workshops and radio plays by presenting the Montreal premiere of “Vanya and Sonia and Masha and Spike” which sees the primary performing company members together on stage for the first time.

Winner of the 2013 Tony Award for Best Play. Siblings Vanya (Donald Rees “Mistakes Were Made”) and Sonia (Emma McQueen “33 Variations” )share a home where they bicker and complain about the circumstances of their lives. Suddenly, their movie-star sister, Masha (Stephanie McKenna “Sylvia”) , swoops in with her new boy toy, Spike (Sean Curley “ART”). Old resentments flare up, eventually leading to threats to sell the house. Also on the scene are sassy maid Cassandra (Holly Greco), who can predict the future, and a lovely young aspiring actress named Nina, whose prettiness somewhat worries the imperious Masha.

“…riotous…the show’s a ton of fun even if you can’t tell your Seagull from your Uncle Vanya…This is the kind of full-on comedy that’s sadly rare on Broadway.” —NY Post.

“Everyone has a monologue that is nothing short of hilarious. (You’ll find yourself using that word a lot.)…You’ve only spent a weekend with these people, but you might want to spend the rest of your life with Vanya and Sonia and Masha and Spike.”—Huffington Post.

Vanya and Sonya and Masha and Spike