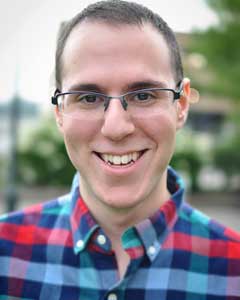 You may remember Zach Brown from our 2014 production of Fred Carmichael’s “Done to Death”, the murder mystery parody that ran for a 2-week run at the MAI. Zach is one of Montreal’s most exciting up-and-coming actors (so exciting he is no longer, in fact, in Montreal), and we were delighted to have a role befitting of his unconventional comedic talent in such an outlandish play.

Zach has recently taken a hiatus from Montreal, as he has made the move to New York City to continue his acting training and career. We’re very proud of him for taking such a big step, and we wanted to check in with him about his momentous journey.

How did you get started as an actor?

Immediately after finishing high school, I enrolled in Dawson College’s Professional Theatre program and graduated in 2012. In addition to that, I studied with some of the city’s finest acting coaches, such as Suzanna Lenir’s On-Camera Studio and Straeon Acting Studio’s Jock MacDonald. I was also able to train by working on student films at schools such as Concordia University and the Trebas Institute. I feel like I was really able to take advantage of the wide breadth of opportunities that Montreal offers to new acting students!

What are some projects you have worked on?

After graduating, I was proud to join Playwright Hero Productions, a company formed primarily of Dawson graduates, for their inaugural production of “The Vindictive Vice President”, written by Jimmy Karamanis, as well as the following year’s sequel, “The Horrendously Heinous Heiress” at Mainline Theatre. You may have heard of them, as they’re currently enjoying the tremendous success of their latest musical, “Johnny Legdick: A Rock Opera”.

I’ve performed at the McGill Players Theatre in a production of George Feydeau’s “Cat Among the Pigeons”, directed by Adam Capriolo. But my best experience at McGill came shortly before I left for New York, when I performed on their main stage, the renowned Moyse Hall Theatre, as a leading role in the world premiere of Dane Stewart’s “How Exile Melts”. And of course I’m so happy that I was able to work on Brave New Production’s “Done to Death” with the company’s star director, Emma McQueen.

Tell us about your move to New York!

I moved to New York a year ago after being accepted at the Atlantic Acting School, an affiliate of NYU’s theatre department and one of the city’s most prestigious acting conservatories. It was recommended to me as the best place to continue my training as an actor while also getting to expand my horizons by living at the centre of the country’s acting industry. Truthfully, I had been a bit hesitant to take such a big leap in pursuing my dreams, but I can now say that it’s the best thing that has ever happened to me. It’s been an invaluable experience of growth and inspiration, and it’s really opened my eyes to the various paths that are available to me, whether it is in this city or back in Canada.

If anyone reading this ever has any questions about NYC, related to acting or just the city itself, please do not hesitate to ask. I am glad to be able to act as an NYC contact for any members of Montreal’s theatre community. And, of course, I invite all members of the Brave New Productions community to please get in touch if you ever are in the city, I am happy to be a tour guide or help people find a place to stay.

What have you been up to this summer?

I actually just finished stage managing the premiere of a new alumni-written play at the Linda Gross Theatre, which is the Atlantic Theater Company’s main off-broadway venue. It was my first real venture into the world of stage management and I’m super grateful for the opportunity. I’ve also had the opportunity to help teach a children’s theatre program, which involves creating custom plays and choreographies for children interested in learning about acting. And I’ve gotten my first experience working with younger teenage students, helping teach the basics of acting to younger people who are just starting to enter the world of acting.

Do you have any final thoughts? Plans for the future?

It’s really too early to say! Though I came here primarily to study acting (my greatest goal has always been to work in TV), I keep being surprised at the opportunities I get to explore all the different parts of the world of theatre, something that I never really dove into back when I was in Montreal. My time in New York has not gone at all like I expected it to. So, at the moment, my plan is to just go back to school in the fall and keep working as hard as possible, and being open to trying new things. Honestly, I’ve even started to wonder about trying out stuff like directing or writing when I’ve never had any interest in it before. I’m so lucky to have the opportunity to be here that I really want to explore everything I can, because you never know if you might regret not exploring certain avenues in the future.

Also, I’d just like to thank you again for having me as part of your team! This will read like shameless promotion, (and I promise I wasn’t coerced into saying this) but the ensemble members of Brave New Productions are truly amazing people who have been kinder to me than I have ever deserved! I encourage everyone who is interested in being part of the BNP community to reach out, go see a show, find out if there are any opportunities for you, etc, you won’t regret it. Theatre is all about community and the connections that form between people, so I hope people reading this will take the chance to get involved. One of the things I love the most about BNP is that they truly care about bringing people together. And after all, I’m sad that I’m not in Montreal right now and can’t be around to support the company, so I’m totally jealous of the people who get to be part of the amazing work these guys are putting out! Keep it up, BNP, and I will see you all soon!