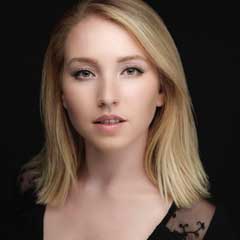 Riva Rose joins Brave New Productions for the Montreal Premiere of “Vanya and Sonia and Masha and Spike” by Christopher Durang.

What brought you to acting? What’s the appeal?

I began acting because of watching other actors performances. I would watch them with awe and get completely wrapped up in the emotional journey they took me through. They made me feel better when I was feeling sad, they made me cry at things I didn’t know I could cry about, laugh out loud and connect with a story. One day it hit me that I wanted to make people feel that way through watching a performance. Once I began, I realized that it wasn’t just that I could make an audience emotionally connected to my performance, but that I was so emotionally connected and involved in the story and character. It brought out sides of me I didn’t know were there, and it still amazes me what I can connect to.

Tell us about a few of the favorite projects you’ve done and why they became your favourites.

Being involved in Persephone Production’s “Stage Beauty” was definitely a highlight. I had the opportunity to work with such talented actors, directors, stage managers and team members. I got to witness the artistic process of actors and friends of mine from up close and I learned a lot from the experience.

Working with “We Are One” for their production of “Chamber Music” during the Montreal Fringe Festival is another highlight. I was able to work with young artists I admire very much and got to work on a character that was a joy to bring to life.

I once slept through an alarm to wake up on time to get to a performance. I woke up in a panic and quickly put on my costume and makeup (a hospital gown and messy joker-looking makeup). I ran down Sherbrooke street looking this way trying to hail a cab.

Tell us about Vanya and Sonia and Masha and Spike – your character, the story and what audiences should expect.

I have the privilege in this production to play the role of Nina. Nina is the young ingénue of the show- full of brightness, hope and positivity. I think Nina is a perfect contrast to the other characters in the show, and that’s what makes her so funny. She is very positive and in awe of getting to be around one of her favourite actresses and role models. She is sweet, too sweet for her own good. I think the audience should look forward to how her personality interacts with the others in the show. I think they’ll see something of themselves in her. Plus, her innocence is so sweet that it’s funny.